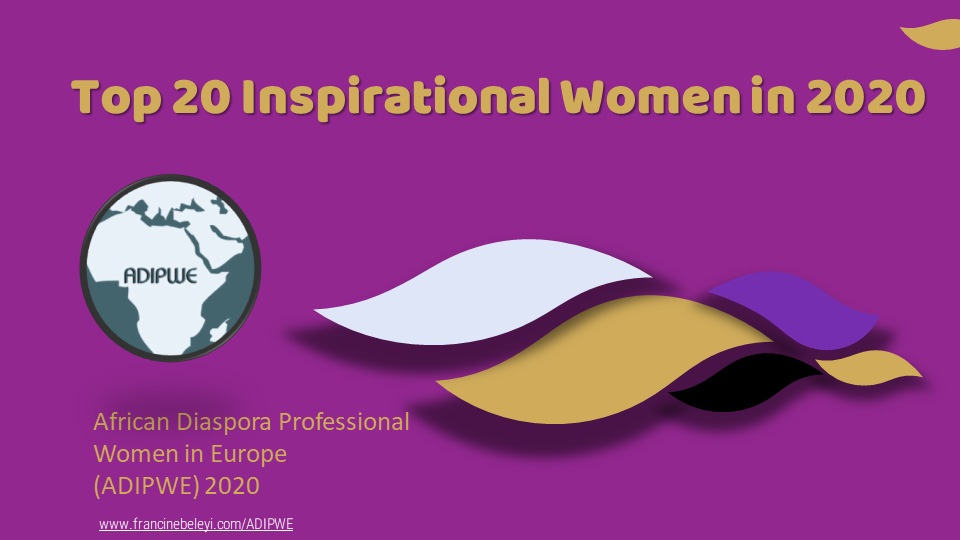 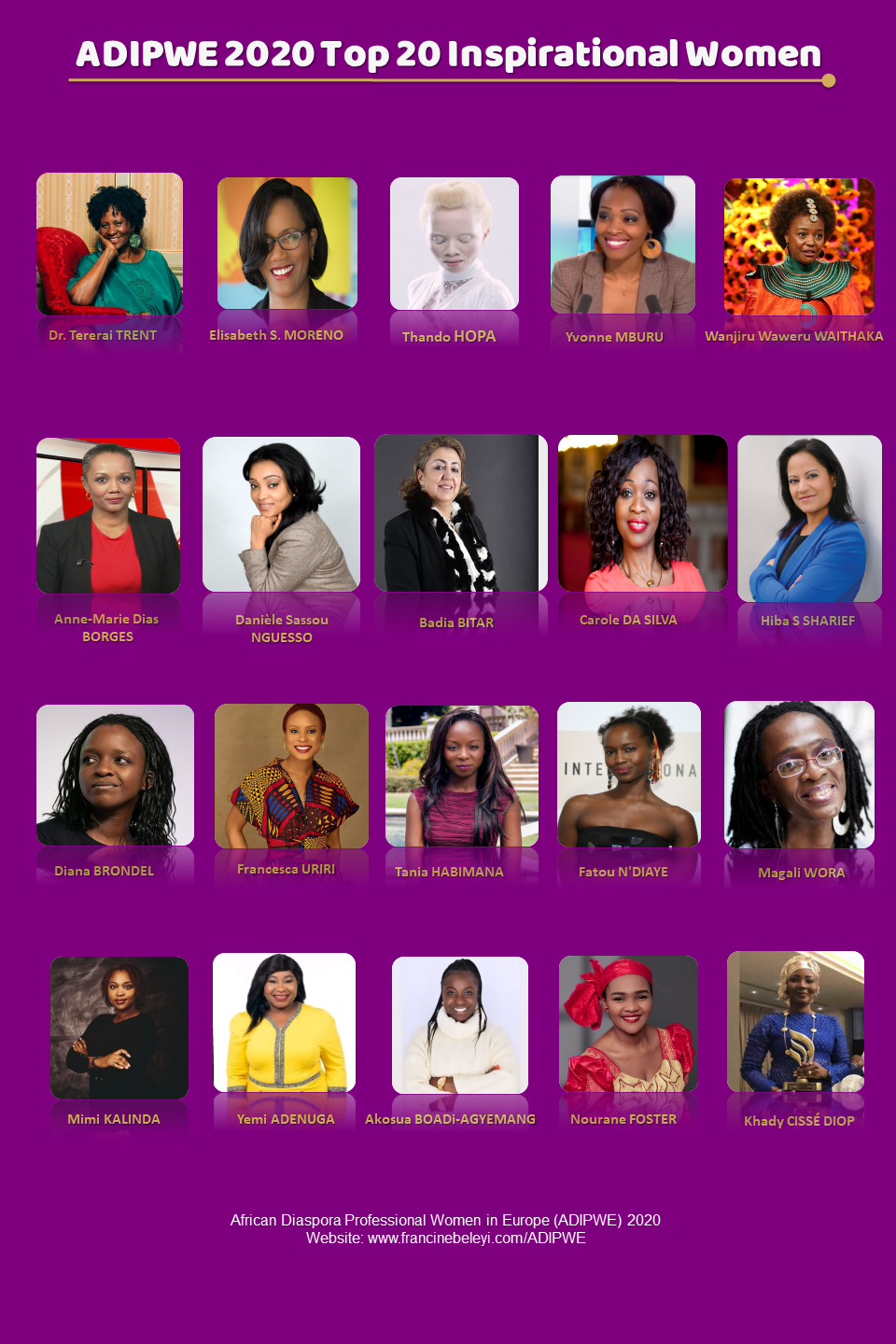 Welcome to the7th edition of the Top 20 Inspirational Women from the African Diaspora Professional Women in Europe (ADIPWE), a list published to mark the International Women’s Day and celebrate the achievements of some of the most inspiring women from Africa both in the Diaspora and on the continent.

It’s all tied together by a single thread: These women are working tirelessly to develop the continent with their initiatives and put Africa on the global map.

There is no particular ranking and the list is sorted alphabetically. The country mentioned in the titles is their country of origin but we understand that they might be holding other nationalities from their host countries. We’ve chosen to highlight their African origin for the purpose of entering this list compiled using internet sources credited at the end of this document, personal inspiration and encounters as well as nominations from the members of the public.

You will find in this list women across industries: science, media, business, fashion, corporate, etc. who are contributing to the development of the continent.

Tererai grew up in a cattle-herding family in rural Zimbabwe, where she dreamed of getting an education, but was married at a young age. Undeterred by traditional women’s role and cultural norms, Tererai determinedly taught herself to read and write from her brother’s schoolbooks. Today she is one of the most internationally recognized voices for quality education and women’s empowerment and Oprah’s “All-Time Favorite Guest.

Elisabeth S. Moreno is Vice President & Managing Director at HP. Elisabeth has a vision of using technology to assist in entrepreneurship and women empowerment in Africa. She was the managing director of Lenovo France before HP. Her goal is to build and lead successful multinational organizations and deliver strong performance. She brings her full self to her work with passion, energy and enthusiasm.

Yvonne Mburu is a Scientist, Entrepreneur, Founder & CEO Nexakili, a professional network bringing together health professionals and scientists worldwide, which looks to promote collaboration and accelerate the availability of innovative medicine in Africa. Mburu is a co-founder and co-president of the French-African Foundation, as well as a member of the Presidential Council for Africa.

Wanjiru Waweru Waithaka is a Creative serial entrepreneur. After 10 years of running Amber Africa and her passion for design and manufacturing Wanjiru realized the need to create the first global children’s brand from Africa. Funkidz Limited is an exciting, innovative children’s brand that designs and manufactures products targeting children from age 0-16 years. Wanjiru who believes by doing what she does every day, taking a step at a time she can be part of a positive change in Africa for young entrepreneurs.

Anne-Marie Dias Borges is TV Presenter and Producer at BBC. Ex-chief information officer at Africa24 and passionate about children’s and women’s rights and Africa.  When she is not on air, she likes to contribute to non-governmental and charitable activities, notably in Cabo-Verde where she has organized two successful anti-drugs campaigns, in partnership with the United Nations.

Danièle Sassou Nguesso is a social entrepreneur and president of the Sounga foundation which works for a better integration of Congolese and African women. After opening her first optical store, more than a decade later, Danièle is now at the helm of a paramedical group, with the flagship Optical Medical Clinic (CMO), present in 5 cities in Africa. She is also passionate about seeing a fairer gender equality between men and women in the Congo.

Badia Bitar is the President of Women Entrepreneurs Association AFEM of Marrakesh-Safi region, Vice-President of the national AFEM & CEO of Palais El-Miria Riad in Marrakesh. She swapped her biologist blouse to become a woman entrepreneur, turning first to decoration and crafts to help women artisans to become financially independent and develop their business. Badia support women from the Marrakech region and nationally and is active in many associations.

Carole Da Silva is an Entrepreneur, presenter and producer of Woman & Power show at ICI TELEVISION, ORTB, TV5 MONDE, TELESUD & YOUTUBE. The show is dedicated highlights professional, daring and authentic women. She is passionate about diversity and inclusion. For over 15 years, Carole supported over 10,000 young graduates to enter the job market, with more than 66% of women. She also trained more than 2,000 company employees to better understand the challenges of diversity and gender.

Hiba Sharief is CIO and Startup Advisor, Thought Leader, Social Entrepreneur & Investor. Hiba is the Chief Executive Officer of Elevoro. She previously served as Vice President of Information Technology at Oportun, a financial technology company with the mission of providing affordable loans to people with little or no credit history to establish credit and build a better future. Named one of Silicon Valley’s 40 under 40 in 2017, she is the Ambassador for Sudan for Women In Africa Initiative.

Diana Brondel is the CEO & Founder of Xaalys. She designed the tool she would love to use as a parent to teach her children how to manage and value money. She launched Xaalys in 2017, a financial education application for young people. Diana is a seasoned finance professional, a former banker who worked for Societe Generale Group for 10 years before launching her fintech venture.

Francesca Uriri is a Public Relations and Communications expert and social entrepreneur. She is an Internal Communications Lead, People, Culture & Diversity at Uber and the founder of a non-profit Leading Ladies Africa, which aims at providing skills to African women necessary for their success. She also sits on the Board of Trustees of The Future Project.

Tania Habimana is a Co-Founder & CEO at Nonzēro Africa, an integrated marketing company with a focus on creating impact programs and enterprise development campaigns in Africa.  Habimana is also the co-founder & television host of Tailored Business. The show follows the journey of the entrepreneur as she travels across Africa making suits for prominent businesspeople and personalities.

Fatou N’diaye is a blogger who refuses to go unnoticed. She is redefining black beauty. N’diaye’s outlook on beauty really comes through on her Instagram account, where every post reflects her brilliance, beauty, and a bit of her African roots. She started her blog in 2007 and grew to what it is today, working with multinational beauty /fashion brands.

Magali Wora is Label Manager at Believe Distribution Services. She has worked with many artists in Africa and observed that many African artists are talented but poorly managed. Magali’s mission is to train the next generation of artist managers looking to do things the right way. She has published a book called initiation Guide to artistic management in urban music in Africa in which she shares her wealth of experience in the profession and tools as an artist manager.

Mimi Kalinda is the Group CEO and Co-Founder at Africa Communications Media Group, a public relations and communications agency based in Johannesburg, South Africa. Mimi is deeply concerned about the “African” narrative, enthusiastic about Africa’s transformation. She is passionate about giving Africans a voice to counter the stereotypical image people all over the world have of Africa and Africans.

Yemi Adenuga is Ireland’s 1st Black Female Councillor. Yemi is an African business leader and role Model in Diaspora making positive impact. She is a woman with a passion and a vision to inspire, empower and impact women & youth through a positive orientation and empowerment across Africa, Europe and America. Yemi is also the author of ‘The power of THANK YOU’, a guide to making career choices’, a book which has become a training tool for helping secondary school students make career choices early in life. She distributes this book FREE to secondary school students internationally and has so far distributed over 5000 copies of the book FREE.

Akosua Boadi-Agyemang is a Program Manager at Microsoft. Her story became a viral hit after a LinkedIn post requesting internship opportunities. When she arrived in the US, she started an initiative called Re-Envision Africa which focuses on educating people about the untold narrative of Africa. This initiative highlights the story of Africa in a positive way away from clichés. She is passionate about creating a positive impact, one BOLD step at a time.

Nourane Foster is self-made young businesswoman. She made a fortune by launching her Nourishka brand on the hair extensions market. She expanded her business in hotels, agriculture, and fast delivery. Convinced that no one will change things in her country but themselves, she is now involved in politics.

Khady Cisse Diop, is the General Manager of Win Industrie. She is on a mission to quench the thirst of the Senegalese and changing her industry with O’Royal. Khady created her company Baraka as exclusive distributor of Tigo products throughout the Dakar suburbs and later joined Tigo management team. She finally left he company to turn around Win Industrie, a Senegalese soft drink company where she successfully launched the O’Royal brand.

African Diaspora Professional Women in Europe (ADIPWE) is an online forum that aims to:

This forum is open to women of African Diaspora and to anyone who has a passion for Africa development.

Join ADIPWE LinkedIn group with 300+ members to participate in the conversation. 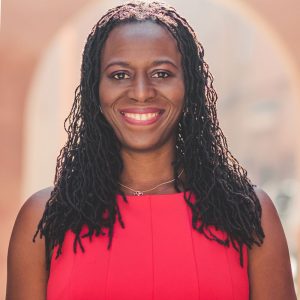 Francine Beleyi is the Editor and Founder of African Diaspora Professional Women in Europe (ADIPWE), a list started in 2011 to feature the achievements of African women in their host countries and on the continent. Francine is a bilingual, French-English, Digital Strategist, Business Advisor and expert in Personal Branding. She is the result of three cultures: Togolese, French & British and is passionate about the development of Africa and empowering people with digital literacy to take advantage of the opportunities in the digital economy.

She is the founder of nucleus of change, international speaker and award-winning author of the book ‘Personal branding in the digital age: How to become a known expert, thrive and make a difference in the connected world’. She hosts the podcast Meaningful Work, Meaningful Life available on iTunes, Spotify and Stitcher.